Variations of a Conceptual Relation from the 17th to the 21st Century.

From epidemics in the 17th century through the Lisbon earthquake in 1755 and to Guernica in World War II, the essays of this volume show how a catastrophic imagination, heavily based on pictorial media and forms of staging, has developed since the early modern period. Thus, the catastrophe in its modern sense seems to be inextricably linked to its spectacular appearance, be it on stage, on screen, or in popular amusement parks. But increasingly, the modern relation between catastrophe and spectacle also confronts us with the unimaginable of invisible catastrophes as was the Holocaust and as is now seen to a large extent in the daily catastrophe of refugees suffering shipwrecks, trying in vain to reach European coasts.

The essays of this volume touch upon the question of how a spectacular imagination of catastrophe is breaking ground with respect to discourse and media history. In their commentary function, these texts elucidate the images of catastrophes that inspire them. The interaction between the catastrophic scene and the text comments makes it possible to reconsider how the spectacular and the catastrophic are interrelated.

Furthermore, the articles not only deal with the spectacularisation of the catastrophic, but also try to present themselves as a type of catastrophe criticism that is derived from the philological readings of the corresponding scenes. There is the underlying ambition for a critical philology of the catastrophe which, in a Benjaminian sense, demonstrates ‘small leaps’ within the catastrophic continuum and in which the catastrophe is confronted by other figures of thought such as the disaster according to Maurice Blanchot. 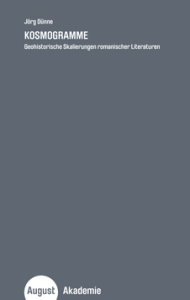